Active noise-canceling headphones have been attracting the attention of users of all walks. The promise to drastically reduce unwanted noise seems to be attractive for music-lovers, commuters and software coders alike.

But is it worth paying the higher price tags of active noise-canceling headphones? Just how good is the headphone in blocking out noise?

What Is Noise In Audio?

Noise can take different meanings amongst various individuals. For some people, the roaring engines during bad traffic are noise. Others may pick up background chatters in a cafe as distracting.

Regardless of the source of noise, it all translates into vibration as molecules collide into each other in the air. The characteristic of the noise waveform is similar to the beautiful classical music projected from your audio player.

However, there is no discerning pattern to the noise waveform. The amplitude, volume, and frequency are random. And for the listener, they are nothing but a distraction.

Most people could tolerate noise if it occurs at low amplitude, but the sound of roaring engines can go beyond distracting. Prolonged exposure to noise is linked to stress and health issues. 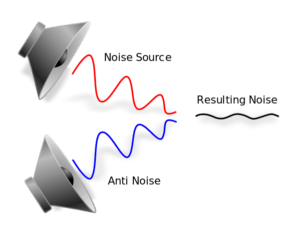 Despite the randomness of the noise waveform, it still forms peaks at both sides of the amplitude. The idea of noise cancellation is not something new. It has been covered in elementary physics that two waveforms of the same frequency but opposite phase will cancel out each other.

Let’s pull out some numbers for a good comparison. Assuming that a noise waveform has an amplitude of 1 millivolt at the point of 1 second. Creating another audio waveform with -1 millivolt at the same interval will result in 0V, which is essentially a noise-less state.

To make it simple, and active noise canceling headphone uses an out-of-phase noise to neutralize the original noise input.

How Does An Active Noise Cancelling Headphone Work?

At a glance, an active noise-canceling headphone looks similar to a regular headphone. Hidden within the construct of the former are the following items.

Miniature microphones are embedded inside the earcups to pick up the noise as it appears to the listener. The noise signal is then injected into the noise-canceling circuitry to produce a similar but out-of-phase waveform.

The term ‘active’ refers to the fact that the noise-canceling circuitry is dependent on a power source. This means that an active noise canceling headphone will have a built-in battery, regardless of whether it’s wired or wireless.

To eliminate noise, the out-of-phase anti-noise audio wave is projected on the earcup. The result is a drastically reduced background noise level compared to a headphone without this feature.

The noise-canceling circuit in the headphone is independent of the audio input. This means that you will experience the same reduction in background noise with or without music playing on the headphone.

In fact, some people bought active noise-canceling headphones purely for the fact that they allow them to concentrate in a less-distracting environment. Often, sound quality is a secondary requirement for this group of headphone users. 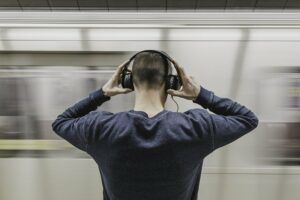 While active noise cancellation is an intriguing technology, it is not a perfect one. If you expect total silent when putting on an active noise canceling headphone, you’ll be disappointed. It’s important to have a realistic expectation of what such headphones could and couldn’t do.

An active noise canceling headphone will not provide total noise suppression. The internal circuitry tends to pick up continuous background noise like busy traffics or the hums of subways. These noises are usually suppressed to 70% of their original volume by the headphone.

Sudden sound input, such as a ringing doorbell or thunder strike will not be suppressed by the headphone. This means you’re able to hear someone talking to you even if you’re putting on an active noise-canceling headphone.

As the active noise cancellation involves injecting anti-noise waveform onto the audio channel, there’s a possibility that it will affect the original sound playing through the headphone. Some people are turned off by the muffled sound due to the noise-canceling feature.

There are many manufacturers that jump the wagon on this technology. However, not all headphones that are labeled as ANC or active noise canceling possess the same quality. Some are better in reducing background noise while others struggle to keep noise out.

Active noise canceling is the basic principle of destructive interference of audio waveform. It’s a neat feature for people who wish for a quieter surrounding, but it isn’t a necessary feature for a decent headphone.

Hopefully, this article has demystified the inner workings of an ANC headphone. 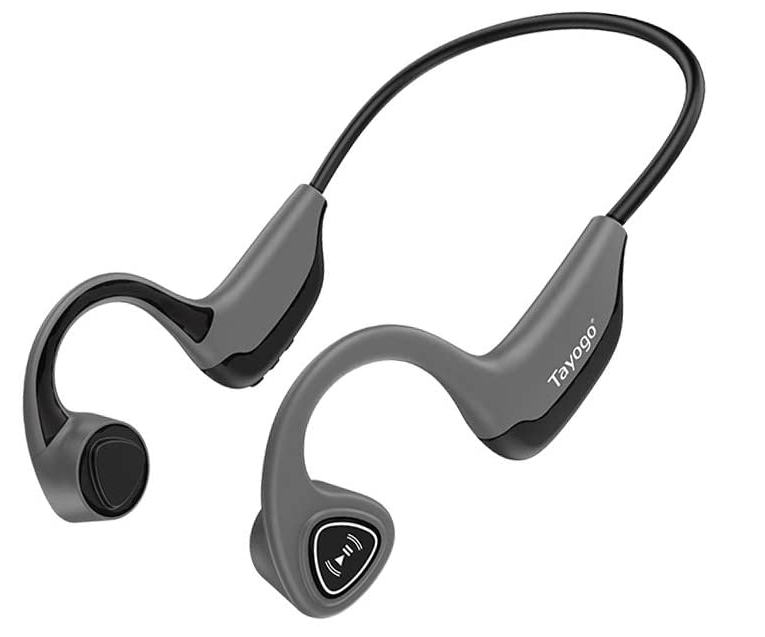