Chances are, you have come across articles suggesting that headphone impedance matching is important. However, not all did a good job in explaining why. Some are too technical for regular headphone users to understand. A few of them are written by writers who are not trained in electronics, which results in plenty of misinformation.

If you are not professionally trained in electronics but you love getting the best sound from the headphone, this article is for you. I’ll try my best to explain why matching the headphone’s impedance is important in simpler words.

What Is Headphone Impedance?

The term impedance refers to the ability of an electronics circuit to resist current passing through it. It is similar to resistance, which most would have come across in basic physics and is measured in Ohm. However, impedance may consist of resistance, capacitance, and inductance or all of them.

Impedance is only relevant when analyzing AC signals, where the amplitude and frequency vary. The audio signal that passes through a headphone is an AC signal, which is why headphone impedance is relevant.

What Is Headphone Impedance Matching?

So far, we’ve only mentioned the impedance of a headphone. For a headphone to work, it needs to be connected to a source, which is either the audio output of a laptop/mobile or an amplifier. The audio source is also made up of electronics and has an impedance value.

Generally, the audio source impedance is quite low. The impedance of your mobile’s audio output measures 5 Ohms or lesser. If you’re using a headphone amplifier, you’ll get an output impedance between 50 Ohm to 100 Ohms, depending on the type of electronic components.

When a headphone is connected to the audio source, you can represent the connection with a simple electronics diagram as follow: 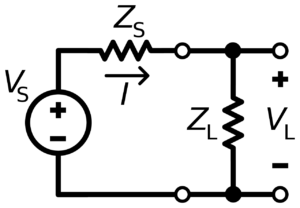 The audio source is made up of a voltage source (Vs) and a source impedance (Zs). The headphone is represented by Zl, which indicates the load impedance.

It’s about ensuring that the ratio of the headphone and the source impedance equals or greater to a particular number. The number is often cited as 8 or 10 by audio experts. The question is why?

To get that answered, you’ll need to understand a metric that’s called the damping factor.

What Is Headphone Damping Factor

To get a high damping factor, you’ll need to increase the headphone impedance or decrease the source impedance.  This ratio is important in determining whether your headphone will function at all and if it does, the quality of the audio output.

The basic operation for a headphone is simple. Send the AC current (audio signal) through the coil and the diaphragm will vibrate against the air. To produce sound loud enough for the ears, the voltage of the audio signal that falls across the load needs to be sufficient.

It is easier to understand this with a voltage divider, which is basically what the audio source and headphone impedance are all about.

In an ideal world, all power generated from an audio source will be transferred to the headphone. However, the world isn’t ideal and the power that a headphone receives depends on the ratio between the load and the source impedance.

Voltage supplied by the audio source will be split between the source impedance and load impedance. Therefore, the voltage received by the headphone is given by :

Zl needs to a large number (multiple times of Zs) so that the headphone driver receives sufficient voltage to function. A typical example will be a mobile output of 1 Ohm connected to a pair of 16 Ohm earphones. This will gives you a damping factor of 16, which is larger than the recommended 10.

By now, it’s clear that a low damping factor results in inefficient voltage transfer to the headphone. Does that mean using a headphone with a 100x impedance or more than the source results in better performance?

First of all, the voltage transfer factor does not increase significantly after a damping factor of 10.

Secondly, a large damping factor value means that the headphone is harder to drive because it means having a significantly larger impedance. Audio source has limited output power, which is why plugging a 600 Ohm headphone into a laptop jack may degrade its sound quality.

Impedance matching is said to be important to achieve critical damping. Is it true?

Let’s start by exploring what critical damping is. 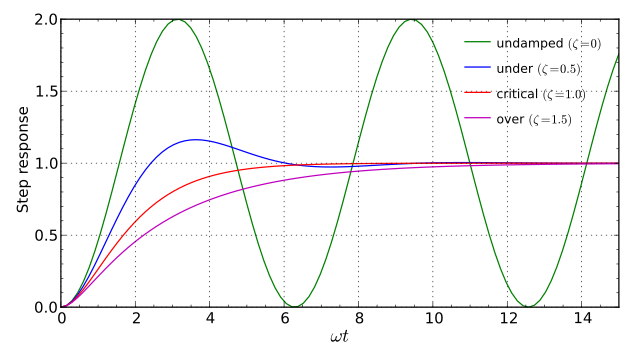 Headphone exhibits similar characteristics to a spring. When a spring is compressed and then released, it could either

Likewise, a headphone’s coil that stops vibrating the moment the signal is cut off has a critically damped response. It is the preferred behavior for a headphone as it ensures the audio is produced correctly based on the signal.

It is true that headphones need to be critically damp to precisely replicate the audio signal. However, it isn’t as simple as pairing a headphone with a certain impedance value to the source.

When translated into an equivalent electronic circuit, a headphone is made up of several resistive, capacitive, and inductive elements, arranged in parallel-series configuration. Here’s how it looks like as an equivalent circuit.

To achieve a critically damped response, the value of the resistive, capacitive and inductive elements of the headphone and audio source needs to be at a specific value so that the damping coefficient, ζ is equal to 1.

The damping coefficient, ζ  is not the same as the damping factor determined by the ratio load and source impedance. It is derived from complex calculations of all the elements present in the headphone and audio source circuitry.

Whether it’s 8 or 10, the rule of thumb for headphone impedance matching is intended to deliver optimal power (voltage) to the headphone. As for ensuring a critically damped response, it takes much more than impedance matching to get the desired results. 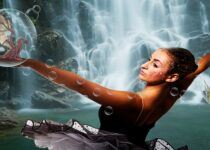