Headphone impedance is a concept that is hard to grasp when you’re not well-versed in the engineering of electronics. Nevertheless, it remains an important headphone parameter that is often overlooked by most users.

In this article, I’ll attempt to explain headphone impedance is as simple as I can. What’s more important is how to choose a headphone with the right impedance value to produce the best sound quality.

It’s hard to explain what impedance is all about without diving into some electronics principle. Most of us will be familiar with resistance. It is a resistive force that prevents current from passing through.

While resistance is relevant for direct current, impedance is a unit of resistance for alternating current. On top of resistive elements, impedance takes into account capacitive and inductive reactance at a specific frequency.

What Is Headphone Impedance All About?

Headphone impedance relates to the measured impedance of its sound driver. It is measured in ohms at the frequency of 1 kHz. The drivers used in headphones is often made of coil windings. The thickness of the coil and the number of winding will affect the overall impedance of the headphone.

You’ll find that most headphones in the market are rated between 8 to 600 ohm. Typical consumer headphones are usually 32 ohms while professional ones have higher impedance. The higher the impedance of the headphone, the more power it takes to produce audible sound.

Whether it’s a 32 ohms or a 600 ohms headphone, it’s pointless to discuss sound quality without mentioning the audio source. This is because the ability of a headphone to produce high-quality sound depends on the audio output. 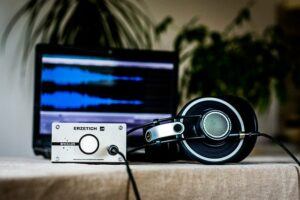 Let’s take a look at what happens when a gross mismatch of impedance happens with headphones.

Going back to the basic laws of electronics, low impedance headphones are easily driven by a minimal amount of current. Battery-powered devices such as mobile phones and laptops are designed with a low-powered audio amplifier.

On the other side of the spectrum, you have the pairing of a high impedance headphone with an equally high powered amplifier. Think about connecting a 600-ohm headphone to a headphone amplifier.

A headphone amplifier delivers more power into the audio signal. This is results in an audio waveform with a larger voltage amplitude. The amplified signal works well with the high-impedance headphone to produce higher quality sound.

Plugging a typical 32-ohm headphone into a headphone amplifier will send more power than the headphone driver could handle. This often results in audio distortion as the peak of the waveform is clipped.

In rare cases, the driver of the headphone will be damaged by the overvoltage as the coil couldn’t handle the excessive power when the amplifier is tuned to the maximum.

A portable music player has a low power amplifier circuit. Plugging in an open-back 600-ohm headphone result in insufficient power delivered over the audio line. As a result, you’ll neither get the sound quality nor the desired volume.

What About Impedance Matching?

Impedance is a parameter that exists not only on the headphone but also on the audio source connected to it. Audio sources, such as a portable music player has a very low impedance value.

The impedance of the audio source is also kept at a minimum to ensure a more balanced frequency response. As the impedance increase, a certain range of frequencies may be attenuated. A high impedance source also results in a reduced damping effect which tends to affect bass quality.

However, some audio sources like headphones amplifiers have significantly higher output impedance. The primary reason for such a design is the high impedance prevents excessive power from being delivered to the output.

Regardless of what’s the impedance of the source, you should use headphones with an impedance that is at least 8x of the source. Unless you’re using a headphone amplifier, it’s safe to presume that most audio devices have impedances of 4 Ohms and below. Therefore, using a 32-ohm headphone complies with the rule of 1/8th.

But why you need to match the audio source with a headphone that’s at least 8x the impedance? I’ve explained it in detail here.

It’s easy to fall to the conclusion that high-impedance headphones are superior in terms of sound quality. Some headphone manufacturers take advantage of the technical jargon to market their products as such.

Before you grab a 600-ohm headphone off the shelf, you’ll need to be aware that a headphone amplifier is needed to produce high-quality sound. High-impedance headphones are marginally better in terms of lesser distortion and improved damping.

But this doesn’t mean that low impedance 32-ohm headphones produce low-quality sounds. If you’re not an audiophile, DJ or producing music professionally, a low impedance headphone will be sufficient. After all, headphone impedance isn’t the only factor that determines sound quality.

It all comes down to how obsessive you are about sound quality. If you’re content with decent-sounding headphones, getting a low impedance headphone will do perfectly fine.

However, if you’re particular on the tiniest sound emitted by a headphone, you may want to go for high-impedance headphones with an additional investment for an amplifier.